kijidokorosato
Hello, I am a craftsman of Kokeshi doll. Kokeshi is Japanese traditional doll appeared about 200 years ago. If it is the people in Japan, it knows without fail, most homes keep being decorated, and it being loved. "Kokeshi doll" is a doll that has expressed a Japanese mind.

The potter's wheel to plane tree

We use a lot of tools to make the wood carving doll. It speaks to "Potter's wheel" in that. 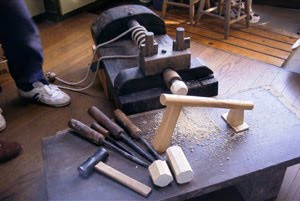 Physical strength is very consumed to this tool.
In the oral instruction, it was usual that the wife turned, and the husband worked. 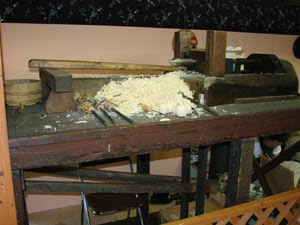 The standstill potter's wheel was invented at the Meiji era.
It is a mechanism that the potter's wheel turns in alternately stepping on the pedal with the shank's mare.
In a word, it came to be able to work alone by turning alone. 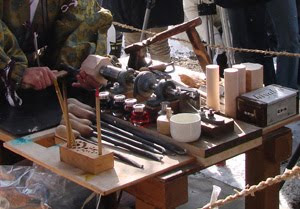 We used the motor potter's wheel, the labor of work was reduced greatly, and production became it a lot more, too.

I write the appearance of work by the arrangement potter's wheel in the next article.
Posted by kijidokorosato at 2:29 PM No comments:

There is important work "Kidori"  before the kokeshi doll completes after the dryness of the material ends. 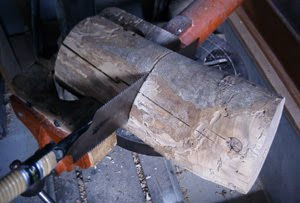 We say, "Kidori" from the tree in the state of the log work to cut out the tree to the size of the work to be made. This greatly controls the quality of the finishing work on kokeshi. It is said that it will account for 80 percent of the working line by the paring, drying, and removing the tree.

At first, we cuts it in the length to be used.
A dry tree is very hard, and doesn't cut easily.Σ(ﾟﾛﾟﾉ)ﾉ 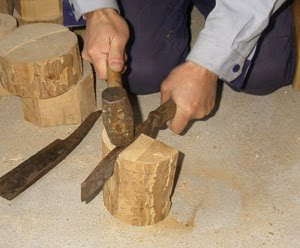 Then, dividing with a hatchet. 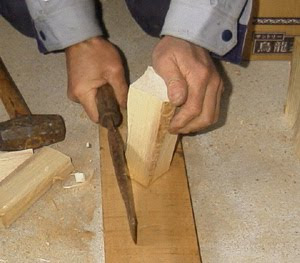 To do work of the potter's wheel ..doing later.. smoothly, four corners is cut down as much as possible. 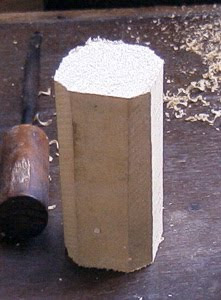 This is completion of "Kidori".
A strong creative impulse boils when a good material is obtained.
However, there is often what the tree blackens, and is feeding on by the insect, too. It does over again at that time.

It is impossible that the tree judges whether contents are good or bad even if it sees from the surface.

Therefore, it is "Do not understand if it doesn't cut it" the world. 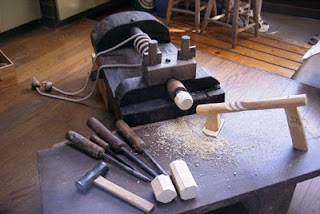 It is not because the material wanting it is obtained even if a lot of money is put out.

Might do over again many times at times, and a good material be prepared.


Next time, the potter's wheel work starts!
Posted by kijidokorosato at 10:24 AM 1 comment:

The work to prepare material of kokeshi. 'Paring of giant dogwood' 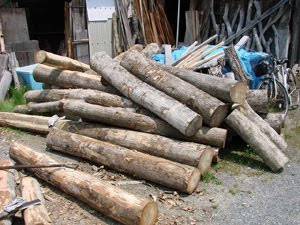 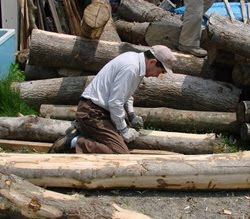 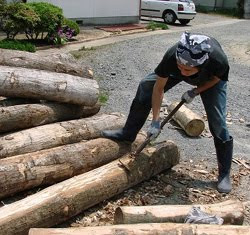 The skin will be peeled off and the giant dogwood deforested in winter is dried during about 1-2 year. 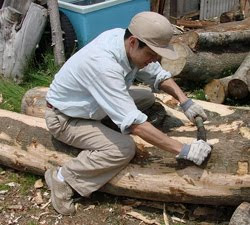 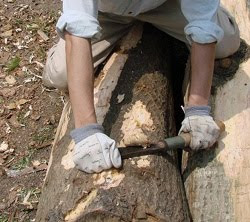 The man in the family works by all members because it is hard work.

When the skin can be peeled off, it carries to the yard of materials, it sets up inverted, and 1-2 year is dried.


Work to carry the tree from which the skin is peeled off is serious. Anyway, there are as much as 200kg and trees with weight, too.


It is dried spending time thus, and the material of the kokeshi doll is completed.
It is terrible heavy labor that prepares the material.


However, such a work that is not seen eyes is very important.
If it can know after a beautiful kokeshi doll, there is work that it takes such time and trouble, I think that I am glad.

Posted by kijidokorosato at 10:48 AM No comments:

Birth of the Kokeshi doll 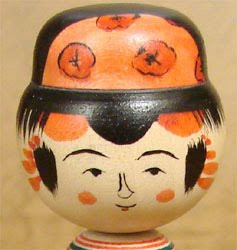 There is a deep relationship between the people's lives in Japan and the birth of Kokeshi doll.
I will talk about that today.

It is Edo period that Kokeshi doll was born about 200 years ago. It is an age where it walked with the sword the samurai did his topknot, called "chommage".

Also in Japan, the productive center of Kokeshi doll is concentrated in the region with the hot spring in the Tohoku region.

The main industry was agriculture in the own country about 200 the day before of year. Especially, rice farm was the most active.People in Japan have eaten rice everyday even now.

As for the climate at the Tohoku region, the winter is long! The snow of some point does not relieved for half of a year.
At last, people who did agriculture germinate the rice plant in a warm place in spring. That is April comes in the end of March.

When May comes, "Plant rice" is done. Summer comes in July. The day that is very hot, and exceeds the temperature 30 degrees continues. The heat greatly grows the rice plant.

At last, the rice plant faces the harvest when September comes in October in autumn.
There is harvest work that is called "Inekari".
It was did by their family's hand  work 200 years ago though they does it with a special machine in modern days.

We have a legend for the making rice in Japan. "The Kanji character of rice means it of 88. It is because 88 hand work is necessary by the time rice is completed. "

Rice that is Japanese staple food is to take time too much to raising.

It is a start of the long winter when becoming it at the end of November. It becomes very cold when the rice farm of the age ends at last, too, and it has a heavy fall of snow. When it is shut by the snow, it is not possible to engage in farming. The farmer is closing in winter.

The farmers went to the travel in the hot spring to heal a very tired body in rice farm during the winter. In the hot spring, there is a very good for the tired body is healed effect. That is called "Touji(Hot-spring cure)". There were quite a lot of people who took the Touji for a cure in the Tohoku region.

The side job during winter was necessary for the farmers in winter.
There was work of the log processing that used "Potter's wheel" for one. The tree was processed to tableware etc. The works made by using "Potter's wheel" sold and the supplementary income was obtained.
The doll thought as a souvenir of the guest of Touji is Kokeshi doll. 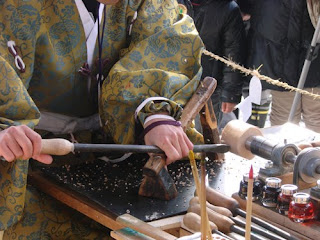 In those days, other dolls of Japan was very expensive, and the farmers were not able to buy them.
However, Kokeshi dolls seems to have been very at a low price pleased with a simple kokeshi doll only of rounding the tree, too.

It gradually became famous in the Japanese whole country, and the person who researched the kokeshi doll also showed up.
If it is Japanese, "Kokeshi doll" know without fail now had the history of born from such people's live.

The question and the impression are waited for concerning "Kokeshi doll". Moreover, please point it out if there is an unnatural point in English. Where to make contact eng@kijidaruma.com
Posted by kijidokorosato at 3:06 PM No comments:

I will introduce myself today.

My name is Hideyuki Sato.
The birth is Japanese country Fukushima Prefecture Iwaki City on August 2, 1977.
I have been working to make the kokeshi doll from 24 years old. It started after had worked for the trading company for two years upon finishing university. It becomes year ninth in this year.
My father and the grandfather also have made the kokeshi doll. In a word, I become a third generation. 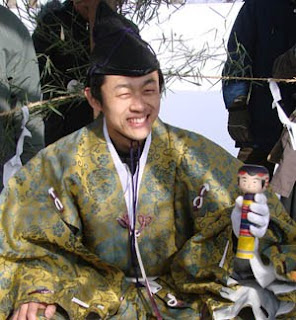 The name of our kokeshi craftsroom is "Kijidokoro Sato" . The grandfather is a founder, and it is 1901 to become independent.
It becomes for ..establishment.. 109 years this year. I will speak either of our families' history.

About "Koujin"
It is a reason that is called, "Kokeshi koujin" to do all processes from the deforestation of the tree to the wood drying, management,
lumbering, the processing, drawing, finish, and sales consistently by the hand work.
For instance, it is "Workman" to do only drawing as only the potter's wheel processing is done and is distinguished from "Koujin".
But deforestation of the tree alone was not done now. because it was angry the owner of the tree when cutting it without permission! 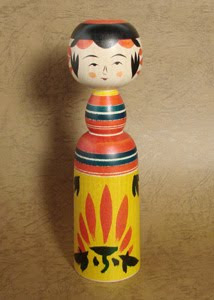 Actually, Being able to consist is that it goes to sales making the kokeshi doll, and life is serious old times and now .
Kokeshi dolls who are born in the life have a life of 100 people each koujin, and the life is projected onto the kokeshi doll.
It is a charm to feel such a deep tasting.

I want to talk from the vision of kokeshi kounin variously the kokeshi doll and myself.
Posted by kijidokorosato at 4:05 PM 2 comments: 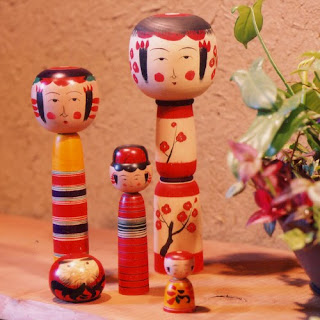 Nice to meet you ☆ My name is Hideyuki Sato.
I live in Japan, Fukushima Prefecture, and work to make "Kokeshi doll".

"Kokeshi doll" is a tradition doll that appeared in Japan about 200 years ago.

The tree of nature is roundly processed with the potter's wheel for woodwork, and the expression and the pattern are drawn with the brush.
The way of making is very simple.

If it is the people in Japan, it knows without fail, most homes keep being decorated, and it being loved.
"Kokeshi doll" is a doll that has expressed a Japanese mind.

I want everybody in the world to learn Japan through happiness of such "Kokeshi doll".
Thank you.
Posted by kijidokorosato at 3:03 PM 2 comments: